A story of journalistic bravery — MercoPress

Behind the lines in 1982: a story of journalistic bravery

By Graham Bound (Stanley, FI) – The days were short during the 1982 occupation, and everything in Stanley seemed hostile and scary. Our situation was hardly safer when the winter sun was setting and the curfew imposed by Argentina forced us back inside. But in whatever substantial building one chose to shelter in, with darkened windows and lit peat stoves, there was comfort and at least the perception of security.

In my family’s case, that “safe” building was the beautiful old Upland Goose Hotel, then owned by our beloved friends, the Kings. Every curfew night, we would share the food we started out, then gather around the shortwave radio to absorb something equally nourishing: reliable information.

In the alcove of the Goose kitchen, a silence fell as someone who really understood how to use the complex communications receiver, carefully tuned it to 11.75 or 9.915 megahertz. The insane din of teleprinters and hisses and static noises that emanated from across the universe would most likely die away, to be replaced by the iconic tunes of the BBC World Service. We would sit up straight and think, “It’s okay! Our friends are still here, just as they said they would be.

“Lillibulero” prefaced the news. ‘Oranges and Lemons’ told us it was time for our own ‘Calling the Falklands’. And the arrival of “Radio Newsreel” was heralded by the hard-hitting and authoritative “Imperial Echoes”. The music itself beat seven Argentine propaganda bells. “Listen over there,” he said loudly. “Our people have the truth for you.”

And they did. These reporters were our friends, telling us the best they could about the dreadful things happening around the Falklands and in London, Buenos Aires and Washington, where our future was being decided. Our on-air friend kept us going and never failed to be there when we needed them.

And that’s how most of us got to know Harold Briley, the BBC’s South America correspondent, who was based in the enemy camp in Buenos Aires and reported on it fearlessly.

Harold (whom I have known very well since 1982) was part of a BBC trinity; Brian Hanrahan (who “counted them all and counted them all”). Robert Fox, who memorably brought back the mud and gore from Goose Green, was the others. Hanrahan (who died far too young) and Fox (who continues to report on defense issues today) published books after the war. But Harold continued his day job.

Finally, 40 years later and at the age of 91, he publishes his memoirs of the conflict, its genesis and its aftermath, giving fascinating insights from a perspective unique to Argentina.

The main story in this country before April 1982 was what appeared to be the disintegration of an economy (a 100 million peso banknote had been introduced) and the brutal suppression of dissent by a far-right junta. The Buenos Aires of the day would have been no place for a shy young reporter, but luckily Harold was a seasoned, tenacious, and courageous foreign reporter too. He received death threats and he was hunted down by government kidnap teams, who proved time and time again that they were more than capable of carrying out their threats.

I suspect Harold’s disarming charm gave him a protective veneer; that and his British passport. The cover of his book shows him on the flight deck of an aircraft carrier after the war. Dressed in a bulky naval survival suit, he smiles and his eyes glint with folds of orange plastic. I’m not sure Harold’s sparkle would protect him from the thugs who patrolled Buenos Aires in unmarked Ford Falcons, but in any situation less serious than that, it would certainly help. 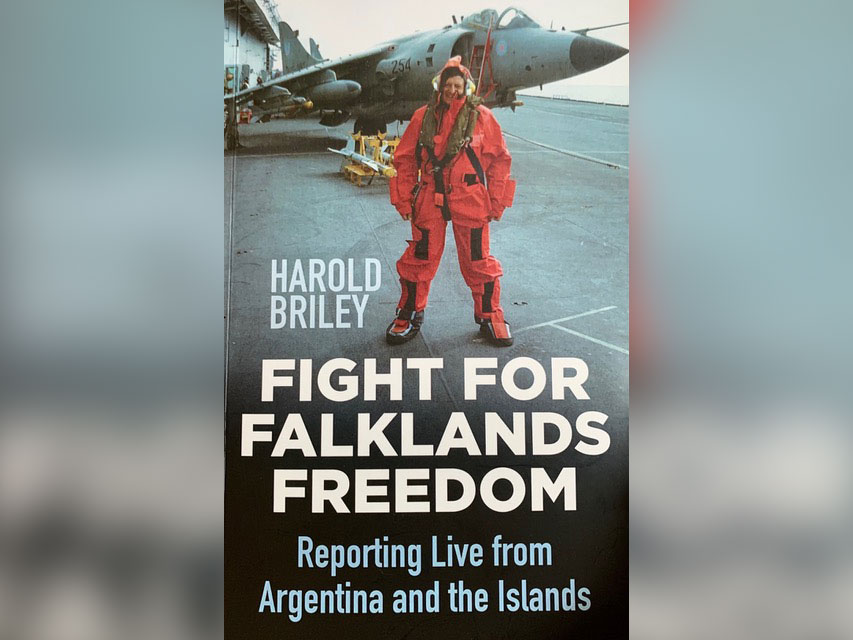 The book tells the story of the islanders during the war, and that is of course a subject close to my heart.

It was worth waiting 40 years for this book. Transcripts of Harold’s World Service reports always convey urgency and drama. He was in a unique position to observe and analyze, and he seemed to have a special respect for the Falkland Islands, which he first encountered when he visited the islands some 18 months before the invasion. This is evident from his reports.

On February 25, 1982, when talks between London and Buenos Aires seemed to have reached an impasse, Harold sounded the alarm. He ran a story covering “speculation that Argentine generals may use force to get what they want.” He said: “A Foreign Ministry spokesman told me that Argentina’s patience was at an end and the Galtieri government wanted quick results.” He completed his report with words that reflected his concern for us: “The islanders don’t want to be part of Argentina. They insist they are British and want to stay that way.

Harold’s journalism is objective, but he understood the islanders and wanted to make sure their voices were heard. This is mainly why he is loved and respected in the Falklands, even today.

I find his vision of British diplomacy and intelligence quite fascinating. “The warning signs were so obvious I couldn’t understand why the UK government hadn’t responded,” he wrote. But, as he came to understand, British diplomats were not firmly committed to defending the security of UK real estate in the South Atlantic. Lord Carrington, the Foreign Secretary in 1982, told Harold he had been “misled” by the then British Ambassador to Buenos Aires, Anthony Williams. It is a remarkable statement.

Incredibly, Harold received a phone call from the press officer at the British Embassy in Buenos Aires, asking if he could explain the British policy towards Argentina and the Falklands. Harold said regretfully that it was a mystery to him too.

Even more disturbing is the author’s account of the top-secret negotiations that took place between junior foreign minister Nicholas Ridley and senior Argentine air force officer Carlos Cavandoli. Harold attributes these revelations to author and scholar Lawrence Freedman, but they are told concisely and well here.

Ridley and Cavandoli met in great secrecy in Switzerland and developed not only a close friendship, but also a “leaseback” plan for sovereignty, which would eventually be presented and forcefully rejected by the islanders. It was always assumed to be just a British plan, but now we know it was part of a complex plan devised jointly by Buenos Aires and London. It was, Harold quotes Lord Carrington as saying, “stealthy”.

The book tells the story of the islanders during the war, and that is of course a subject close to my heart. His admiration for the Falklands comes through very clearly. I suspect he sees us as the only national grouping in the long history of the conflict that retains its honor totally intact.

Harold Briley’s story reveals so much, and time has not dulled its bite. Read it, enjoy it and, especially if you weren’t around in 1982, learn from it. The events he describes and explains still shape relations between Argentina, the Falklands and Great Britain today.