From Bedtime Story to Life’s Work: A True Family Bible

The books are described as “family story books” and tell the Old Testament for children and adults. The narrative text rubs shoulders with reproductions of masterpieces of art. There is a simple explanation for children, with a more scholarly commentary for adults.

The author offers an overview of current academic theology, with particular emphasis on Jewish understanding of Scripture. The intention is to introduce the texts intelligibly, book by book, and to provide sufficient theological basis to encourage meaningful discussion.

Over the past decade, she has published three large volumes (The Five Books of Moses; Stories of Kings, Judges and Prophets; and The books of the prophets), of which she translated the first two into English. Other volumes are in progress.

Part of the show’s goal is to recover what it prefers to call the First Testament. “There is a deep-rooted prejudice in almost everyone: the Old Testament, the first part of the Christian Bible, can be ignored,” she writes in the introduction to the first volume. It is the equivalent of looking at the last page of history first.

“The wonderful ‘music’ of the one Christian Bible can only begin to play when the Old Testament serves as a sounding board for the New,” she writes. “We shouldn’t deprive our children of these deep stories about God and the people who have sought to discover him.”

SO, HOW did it all start? The books are the fulfillment of a lifelong dream, she says, dating back to when she read to her five children (now in their 20s and 30s) at bedtime. She wanted to be able to share Bible stories in language they could understand, but that didn’t leave them feeling cheated when they grew up. She couldn’t find a children’s Bible that did the trick.

“I was not satisfied with the wording. Sometimes it seemed awkward and it wasn’t really clear what they were saying,” she said. She also realized the gaps in her own knowledge. “I started reading the stories and realized that I didn’t know much myself. How do the stories all connect?

Her husband came home one day with a picture Bible with artwork. “When you read to children, what you find is that they are glued to the illustrations,” she says. 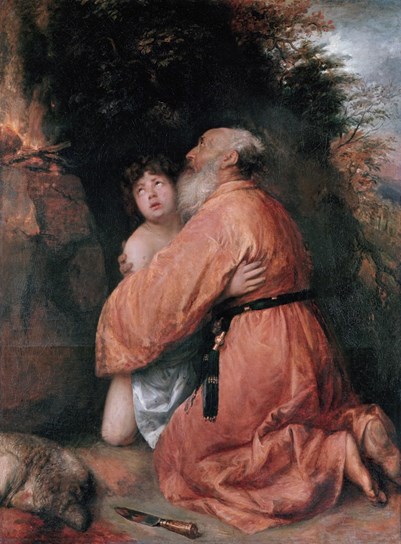 alamyAbraham’s Offering (circa 1638) by Jan Lievens

She tells the story of one of her sons who cried when she showed him the work of Hieronymus Bosch. Christ carrying the cross. “I was telling him the story about it, and he was just crying. So I thought, ‘Wow, what power!’ I saw how the pictures would move [the children]and how we could talk about it.

The images had “tremendous influence” on how the stories were received – something she believes is overlooked by theologians. “Images are more direct than texts. They can affect us immediately,” she says. “That’s why they are so important, especially for our children. The kind of images they see when we read Bible stories to them makes a big difference.

“Images accompany us throughout our lives. No well-meaning children’s graphic designer can grasp the divine mystery: it too quickly becomes flat and negatively changes the feelings we have linked to the illustrated biblical text. Only classical art in its unfathomable depth can be a worthy partner of the Bible.

She believes this is the key to providing something that lasts. “I don’t want to minimize the wonderful children’s Bibles that there are, of course, but children will throw them away, and then the danger is that anything to do with religion is also ignored. You need to have a Bible that the kids can grow into, not get out of.

The idea occurred to him that there was a void in the market. “My first idea was to write a single book, with the New Testament in it,” she said. But it wasn’t enough. “I wanted a simple, book-by-book guide to the entire Bible, cover to cover.

“I was amazed and surprised. I realized that there were so many texts, stories and all kinds of literary genres that O couldn’t fit them into one book. And I thought, ‘It’s too bad nobody really reads them. They’ll be lost after a while, because who do you know who bothers to read that sharp Old Testament? So I just thought, ‘I want to know, myself, but, at the same time, maybe I can help other people who think the same thing.'”

Lier is not a theologian; she started her professional life as a journalist before taking a break to raise her family. “Maybe I have a different way of approaching the Bible, because I studied English and philosophy; so it’s a different way of looking at it,” she says. That said, she only started the project after taking courses in biblical literature, theology and art history at the University of Bonn, about ten miles from her home in Bad Honnef.

“It’s not what you call a master’s or a doctorate, or anything,” she said. “My readers have to put up with this. But I’ve read all these different books, and I try to be scientifically very specific.

She was well supported by the academics of the University of Bonn. She takes a historical/critical approach, describing her theology as dominant. But, although Roman Catholic, she criticizes the role played by the Vatican in biblical interpretation. “We have the problem of the Church being involved in biblical interpretation. We have the magisterium in Rome, which I find ridiculous.

She quotes one of her professors, a specialist in Isaiah. “He was translating a new version of Isaiah. Chapter 7 includes the verse about a virgin bearing a child. Hebrew is amma, which means a woman. And he said, “You know, I wrote ‘virgin’ from the start because I knew that Rome [insist on it].’

“It’s really sad, actually. They say tradition is so important, but I think you have to embrace scholarship along the way. If scholarship finds that there are many sources in the Pentateuch, for example, you must accept it. The Catholic scholars had a big problem with that.

The LIER intends that the paintings serve as a gateway to encourage children in their understanding. One of his professors at the University of Bonn taught him that he had to stand for at least an hour in front of each painting. “Just imagine looking at a photo so much. It slows down time. He can start to stick with you, and it will last a long time, if he’s good,” she says. 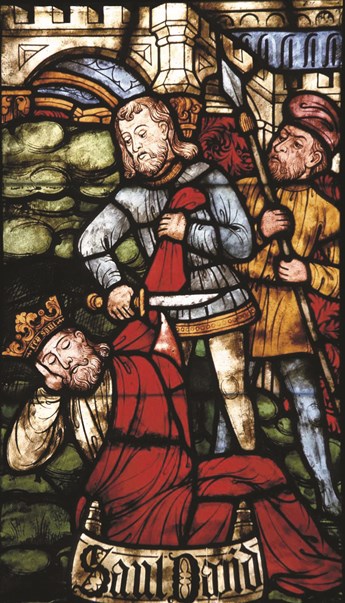 She likes to think that parents will take their children to a museum to visit a painting they’ve seen in one of her books – something, she says, kids love.

Lier took great care in choosing the paintings: for example, avoiding any representation of God in the form of an old man with a beard. “I don’t want to carry this cliche to children.”

Art really matters to her, because art and faith are the two paths to transcendence. “You can discover your own humanity this way. So I don’t want to give the impression that this is just scholarship.

She cites Genesis 22 as an example, when Abraham prepares to sacrifice Isaac. “It’s such a difficult story,” she said. “Of course, you have the Rembrandt and many other paintings, and what do they show? They show Abraham about to slaughter his son. . . but that doesn’t really capture the story. There’s another idea, and that’s what I put in my book: Jan Lievens [in Abraham’s Offering] Abraham and Isaac then embrace, at the end of the trial.

While the first idea “traumatizes” the reader, the second “feeds your soul with hope and comfort. And that captures what the story is really about, and the story is about trusting God.

She set up her own publishing house (Verlag Bibel & Kunst) to carry out the project, after being told by publishers that it was not commercially viable, given the production costs. “It’s an idealistic project,” she says. The logo is the burning bush, because “it burns without being consumed, and it shows the paradoxical nature of the proximity of God. . . You cannot capture it, but, at the same time, the fire warms you, and it is near”.

The books are available on the Lier website and can be found in select bookstores. They are not cheap, between €28 and €34.90 per volume, or €80 for a set of three; there is a cheaper pdf option though.

The response to the German version has been encouraging. She tells the story of a retired teacher who took the trouble to telephone her to thank her for her analysis. “He said, ‘You know, I’m old and I have heart problems; so please hurry to the second volume. It was really good, because he kept calling me until he died.

She thinks her target audience may be grandparents rather than parents because grandparents have free time. “I get the best reactions from them. They may be more into the culture, or they know more. They’ve been to more museums, so they appreciate that. 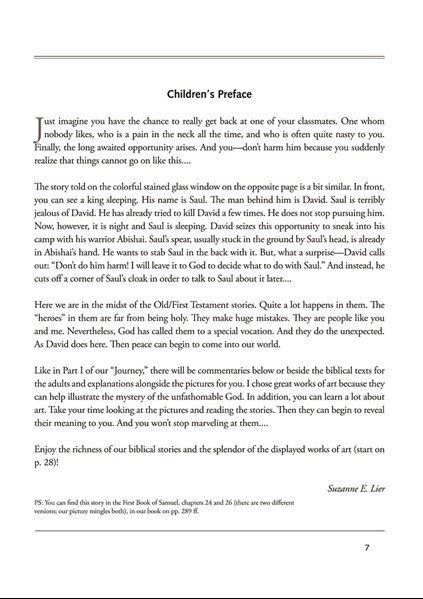 The English versions were a harder sell, so she hesitated to translate the third volume. “I tried very hard to market the books in America, Great Britain and Australia. In Germany I kind of know how to do it. Brexit didn’t help because postage became a lot more expensive.

“I would like to continue translating it, but what I need are English readers to encourage me,” she says.

For the time being, she continues her work on the remarkable books of the Old Testament. Then there’s the Apocrypha, and maybe the New Testament — all of that, she says, depends on how life goes. “I would like to stick to the four years [per volume]; I don’t know what will happen in my life. My mother is 95 years old and she has dementia. But I’m sure I’ll continue, because I love doing it.

She hopes her books will help people on their journey of faith. “I would like people to tell me where it helps them to renew their faith – to find a way back to a discovery of faith, because faith is something that enriches your life so much. It can keep you alive and give you a foothold in life.And it can help you live in such a wonderful way.

“It’s a shame that many people today are turning away from the Church. If I can help someone not to, that would be great.

The project is an attempt to combine faith and reason through scholarship, she says. “I also want to help parents, help them understand and give them the arguments to defend their faith. This is the intellectual side.

“And then I would like to undertake a permanent search for God.

“I heard Pope Francis once say that if you have all the answers, God is not with you. He is right. It’s a way of walking, of learning, of searching.