I’m at Lightroom Bookstore, a popular independent children’s bookstore on a quiet street in Bangalore. I request two recently published books, and am told with a mixture of joy and regret that they are both out of print.

Now, I didn’t ask for the latest book by David Walliams or Julia Donaldson. I wanted picture books by illustrators Priya Kuriyan and Rajiv Eipe, both published by Pratham Books. Eipe’s is silent about a street dog hit by a car who is cared for by a good Samaritan. Kuriyan’s book is about a rookie cop in Kerala on his first case. Find a missing buffalo. Called Beauty. See the story in context


In India, where the children’s book market is dominated by global bestselling authors, countless mythological tales and anthologies of artisan wisdom, the popularity of these two Bengaluru-based illustrators seems like an anomaly. Say their names, and parents, librarians, and children will beam with delight and churn out their favorite books by them.

Ever since I became a parent, their books have graced the shelves of our home. The first set of picture books we purchased included dinosaur-as-long-as-127-children by Geetha Dharmarajan and illustrated by Eipe (Katha Books) and I am so tired written by Radhika Chadha and illustrated by Kuriyan (Tulika Books). Both were their first attempts at picture book illustration and since then they have gone on to make many books that have delighted readers: at nearly 40, Eipe’s tally is close to 30 books, while that Kuriyan, 41, posted almost double. .

“When I illustrated I am so tired, I was trying to make an Indian-looking picture book,” Kuriyan admits, referring to the miniature painting style that pervades the illustrations. “Over the years, however, I’ve discovered a fondness for the familiar and the everyday, and I think more about the context of a story when starting a project.”

A spread of I am so tired

In more recent books, Kuriyan has used mixed media and collage, painstakingly cutting bougainvillea leaves out of pink paper, or painting on newspaper and turning them into everyday objects. In the picture book adaptation by Perumal Murugan Poonachi, the color palette is red and black, alluding to the danger and death lurking in the forest. When I ask her how she focuses on a style, she says, “I let the story guide the treatment. I don’t consciously “push the envelope”. Instead, I think about how to place the story in a context that feels real, relatable, contemporary, and observant of the socio-political life around us. It is this ability to look at the mundane with piercing eyes and portray it with a certain tenderness and wit that makes their works so memorable. Women wear sneakers with salwars, children have plain eyebrows and grandmothers have chin hair.

Dig into their childhood


In the book of Eipe Anand, about a municipal garbage collector, the look of a woman as Anand comes to remove her rubbish is perfectly rendered. She wants the unsightly mess and smells accumulated by her family gone, along with the man who collects them. Anand’s expression shows that he understands, but also that he cannot be blamed. This skill undoubtedly came from decades of drawing, dating back to school years. Eipe spent the first decade of his life in Chennai, before moving with his family to Mumbai where he attended JJ School of Art to study fine art. “Caricating teachers was a hobby at school, and when I got caught, rather than scolding me, my mother bought me paints, oil pastels, sketchbooks, canvases and easels,” Eipe tells me on a Zoom call. This is something parents and educators might want to take note of: that we need to find ways to quietly support our children’s creativity, not crush them or shape them into something we find acceptable and “useful”. “. Kuriyan’s family moved often when she was at school. She says: “Schools, teachers, neighbors and friends were not constants in my life. So my sketchbook became my constant. She remembers being “like wallpaper” at school and not wanting anyone’s attention. “I just wanted the school day to end so I could go home and sketch.”

These childhoods spent observing and drawing led them both to pursue animation studies at the National Institute of Design in Ahmedabad. Luckily for us, they stumbled across children’s book illustration. Making children’s books is certainly not lucrative in India, especially when compared to commercial animation. So we ask ourselves the question, why make them? “Drawing is the only thing I can do to be useful in the world. It’s immensely joyful to be part of creating books and knowing that you are contributing to the enrichment process of someone’s childhood When you create a book, it exists in the world forever, if not in print, at least in the minds and memories of readers,” shares Eipe, who until recently ran his own animation studio. feels that his motivation is sometimes selfish. “I get great pleasure from creating scenarios, observing people and their lives, and making a story out of it. And I feel like I’m making a difference in some way.” way.

Populated by the familiar


And their work makes a difference, not only by entertaining young readers, but also by subtly challenging mainstream norms and attitudes. At Kuriyan’s Ammachi’s glasses (Tulika Books), readers get a slightly different, feisty and adventurous grandmother, a refreshing diversion from the typical cuddly, sanitized portrayal. In Eipe’s collaboration with writer CG Salamander in Maithili and the Minotaur (Puffin), a young witch lives on the outskirts of a human town while attending school in the magical wasteland. She is an outcast in both places even though she strives to fit in. The first in a series of fantasy graphic novels, it’s a dark and beautiful story about friendship and our need to belong.

Although the two have never collaborated, there are a number of parallels that can be drawn between their work. Both are Malayalis who have lived out of state, love to draw ammachis and are keen observers: Eipe sometimes from the table of a local Darshini (a chain of restaurants) in Bangalore, while Kuriyan shares that some of the characters in beauty is missing were spotted walking down the street of his hometown in Kochi during the COVID lockdown. 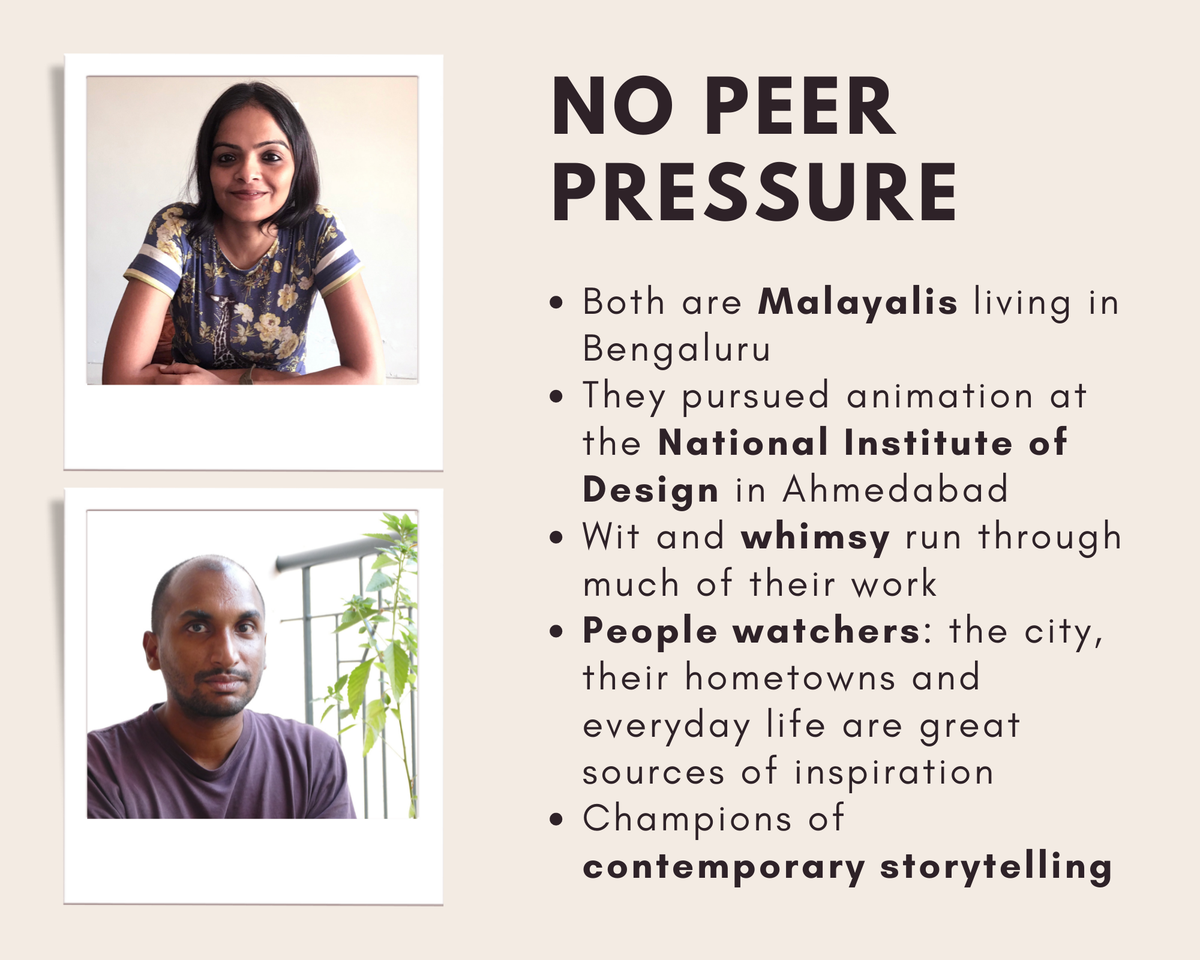 Another similarity is that their illustrations are peppered with inside jokes. Like the delightful animated movies for kids that also have something for adults to watch, Eipe and Kuriyan always offer something for adults too. One of my favorite spreads in Ammachi’s glasses shows granny sound asleep with The Complete Works of Franz Kaka on his chest while a crow steals his glasses.


As readers demand new books from them, as artists, what do they hope for in the years to come? Kuriyan would like to see more experimentation with the form of the book itself. “We’re seeing very few pop-ups and flyers right now, where the form is really part of the story itself.” Eipe hopes for more contemporary storytelling in Indian languages ​​from a more diverse pool of creators, as well as books that attempt to address complex themes and contemporary concerns. And of course, stories that celebrate fantasy and silliness. In the 13 years that I have purchased books from Eipe and Kuriyan, it has been a privilege to watch their work evolve, but also, in some ways, remain familiar and reassuring. Although their art has always been decidedly Indian, I find their way of interpreting what that means has become more nuanced. My kids may be well out of the picture book phase now, but I still buy their books, usually for myself. Sometimes my 14 year old son will see something from one of them and say, “Oh! I know that! You read their books to me when I was little. He’ll leave aside the manga he reads and settle in with their picture book, cocooned by the worlds they create so beautifully.

The first in a series about children’s book illustrators from across the country.

The writer is an author of children’s books (Loki takes guard) and columnist based in Bangalore.